Probably all students try to solve assignments with as little effort as possible -- they collaborate, they look for avialable solutions in the Web, they ask others for help.  If it comes to larger tasks like writing a semester paper, a thesis, or a dissertation, some students sometimes even copy text from other publications without giving credits to these authors.  This is called plagiarism.

In Germany, there had been some major issues discussed in public over the last couple of years:  The former minister of defense had to resign, because his doctoral dissertation was found to be full of texts not written by him.  The former minister responsible for education at schools and universities had to resign, because she forgot to correctly mention the sources she used.  And there had been other cases as well, all following the same pattern: someone reads a dissertation or thesis of a politician, raises some questions, the politician denies, the public starts looking for evidence, and in the end the politician has to resign and loses the academic degree or title associated with this thesis.

Now, one of the candidates for the election to the city government of Zurich is accused to have plagiarized in a Master's thesis.

Two things are really anoying with these issues.

First: When submitting a seminar paper, a thesis, or a dissertation, you have to sign a statement saying that you followed good academic practice (OK, you might not be fully aware of what that means in every detail) and that you did all of the work on your own.  The first part refers to "I did not copy-paste text from other authors without stating the sources, i.e., I did cite everything following the citation rules of my research area."  And the second part refers to "I did not involve ghost writers and if someone helped me with some minor parts of the work (e.g., transcription or annotation of large amounts of empirical data or plotting fancy diagrams), I gave credit to those persons."  So, someone proven guilty for not giving credit where credit is due committed perjury.  This might be a legal issue and could be fined.

Second: No person accused for plagiarism and later proven guilty did show some backbone and stick to what he/she did and say something like "The accusation is probably right, I didn't know then, but I know now that I did something wrong.  I appologize."  They all try to make excuses and argue that it's not of interest to the public, and so on.  It might be true that the paper in question is not of interest to the public, but the fact that someone made a false statement and when proven guilty tries to deny, supports the general perception of "All politicians lie." and "You can trust nobody."

The person accused to have plagiarized her Master's thesis at the ETH, argues that "I did not plagiarize, but maybe not every word in this paper has been written by me."  Does that mean someone else wrote part of her thesis?  In my opinion, this would violate the statement of academic integrity she most probably signed.

But the most annoying argument is: "Anyway, it's not a big deal, it was only a postgraduate (German: 'Nachdiplom') master."  There is no factor of importance when it comes to plagiarism!  You simply are not allowed to use other people's work without permission and without giving credit.  Statements like this one support the misconception that sometimes plagiarism is acceptable.

Professor for one year (week 3): To make a busy impression

Remember when you were a student and went into your professor's office hour?  He always seemed to be very busy, hardly had time to set down, and your conversation was always interrupted by the phone ringing?  You probably felt uneasy and thought your minor problems would disturbe some very important things going on, if your professor even had to answer calls during dedicated time slots for students.

I have a phone in my office.  Nobody ever calls me.

I hold office hours once a week, it's a two-hour slot.  Two weeks ago, no student came.  No phone call.

Last week a student came to discuss an idea for his PhD project.  He was in my office for maybe 10 minutes and the phone rang twice.  One call was from a technician asking if this office was indeed my office.  The second call was from the secretary, asking if I was still in my office.  So, nothing really important, but the student started to feel uneasy.  When he left, no other student was waiting and nobody else called me that day or the day after.

For students: please don't think you would disturb your professor when you make use of dedicated office hours, he or she reserved that time for you.
No comments:


In a Swiss newspaper article (NZZ), one of the prorectors of the University of Zurich (Ottfried Jarren) argues that Swiss universities should have more assistant professors.  These assistant professors should be with tenure track to be more attractive.  In particular, these jobs should attract Swiss researchers.  Ottfried Jarren is asked about Swiss and German professors and he answers that at universities, most of the research positions below professors are part-time jobs (50%), making such a job not very attractive to Swiss junior researchers, but very attractive for foreigeners and for German junior researchers in particular.

He is also asked how to fund these new assistant professors.  And then he answers that universities should be perhaps more like in the US, where five or six professors would "share" one secretary.  So his proposal is -- taken to an extreme -- let's fire secretaries and hire junior professors instead.

It's a bit odd reading statements from a German professor on how to help "our Swiss junior researchers".  But he got Swiss citizenship some years ago (it's stated at the very bottom of the article), so he can make such claims.  However, I know he comes from Germany and also his name is not very Swiss, so for me he still is "a German".

Of course, I would like to pursue my academic career, and yes, I would like to be a professor at a Swiss university.  So if available, I would like to apply for such a job as assistant professor.  However, I'm not quite sure if I'm the intended audience: I'm German, I studied in Germany, but I got academic training in Switzerland, startet my academic career in Switzerland, and got a PhD from the University of Zurich.  On the one hand I am the bad foreigner, on the other hand I am an alumna of the biggest Swiss university and I would expect some support from my Alma Mater.
No comments:

As an employee at an institution, you will receive snail mail from time to time.  This mail will be delivered to your personal mailbox, not to your desk.  Here, all mailboxes are located in a special room and of course you need a key to enter this room.  In my first week, I received a key for my office and for the lab.  So I had to apply for a third key to access the mailbox room.

A week had gone by and I was on my way to ask the secretary about the key application form, when I saw that the door to the room was standing open.  So I had a quick look where exactly my mailbox would be.  Yes, it had already been labeled, and, to my surprise, there was mail in my mailbox: the filled-out application form that I have to sign in order to obtain the key to open the door to access my mailbox.  A perfect Catch 22.

Starting a new adventure: Professor for one year

I start a new adventure, actually, it started on April first.  For one year, I will substitute a professor in theoretical and computational linguistics. I am an acting professor now (Vertretungsprofessor). It's mostly about teaching, but I think it is nice opportunity to try out a new role; according to the contract I have all duties and rights of a "real" professor.

For the next 52 weeks, I will report on new experiences.  I aim to write a post every week on how it feels to be a "professor for one year."

At the same time, I can compare two cultures, two scientific systems:  Although I studied in Germany, I am not familiar with the German system any more.  It sounds a bit awkward, but I studied in the last century, which also means: I studied in the pre-Bologna system.  I spent the last 12 years in Switzerland, doing research, teaching and e-learning consulting at several institutions of higher education.  There have been things I did like a lot and things I didn't like at all.  I'm curious about the German way of being a university.

The first week started somewhat complicated.  I had to sign the contract, which included a lot of regulations only mentioned by acronyms and refering to the "current valid version."  I have no idea to what I agreed, but I did.

Then, I got an office.  Surprisingly, it already had a door plate: 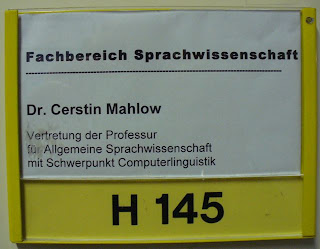 To get a key and an e-mail account and so on I had to go on a orienteering race on my own.  I was sent from station to station for every next step.  When I finally got two keys (one for my office and one for the lab), they looked identical.  I asked the guy who gave them to me how to distinguish them and he answered: "Impossible, just try them out".  Great!

After all, this administrative experience was not too bad.  However, it's a bit strange to knock on all these doors and ask for a form here and a sign out there as if you are the new student assistant when you should feel like "the professor."  The best first day ever I had so far, was at a University of Applied Science: I got keys and then I found all paperwork to sign nicely prepared on my new desk, which also had a new computer, pencils, writing pad, ruler, stapler and so on, badge and business cards, printed relevant regulations and information for new employees.  I felt very wellcome.

Next week, I will start teaching, Summer term is starting then.  I'm really excited: I will teach three courses, I look forward to getting to know students, and I hope we will have encouraging discussions and learn a lot.
No comments: